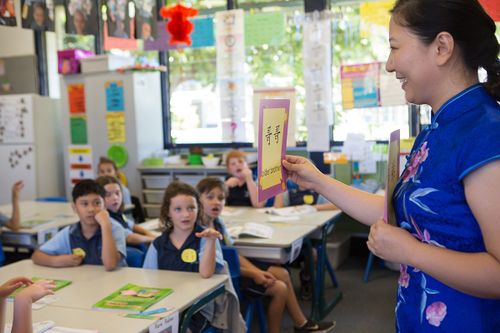 Many adults today wish they’d picked up a second language more completely during their childhood and early schooling years. Learning a second language is an enriching experience that not only has deep learning benefits but also opens doors for future career development as student’s complete their schooling.

Our students, including all year levels from 2 to 6, receive Chinese lessons in Mandarin as Larrakeyah Primary School’s second language of choice.

Learning a second language has been shown to aid in childhood development and even improve performance in other areas of learning.

Mandarin, a form of Chinese, is the world’s most widely spoken language with an estimated 1.2 billion native speakers both within China and internationally.

The 2016 Australian Census indicates that, after English, Mandarin is the most commonly spoken language at home with approximately 600,000 Australians reporting Mandarin as their primary language. Census data also indicates that 1 in 5 Australians now speaks a language other than English at home.

Both locally in Darwin and interstate the melting pot of cultures and diverse backgrounds within Australia means language is now an important part of providing a holistic education to students.

Modern jobs are becoming increasingly international and multifaceted with international trade and global commerce on the rise. As companies look to compete and succeed overseas the preference for employees who are multilingual and able to operate successfully in other cultures is only expected to increase in the next decade.

China is the world's second-largest market and Australia’s biggest trading partner. The free trade agreement between China and Australia means employment opportunities for students entering the workforce, who speak Mandarin and understand Chinese culture, are likely to be greatly improved.

The CDU Confucius Institute is a joint program supported by the Government and the People’s Republic of China to strengthen education and cooperation between Australia and China.

Larrakeyah Primary School is proud of the partnerships we have forged with Darwin Middle School and Darwin High School, providing students with a cohesive pathway beyond their primary education.

Get the latest newsletter!

Get newsletters direct to your email inbox

Want to receive the School Newsletter direct to your email every week? Simply fill in your name and email address below, click get updates and sit back and enjoy the newsletter on your computer or phone.